Your keyboard has many punctuation marks on it, namely no less than four types of punctuation sets designed to separate words from the rest of a text. They all have multiple names as well, making them confusing to define.

These marks, called braces and brackets, include parentheses, chevrons or angle brackets, and braces. And, if you don’t know the difference between a brace and bracket, you might become frustrated when each is acceptable to use.

Let’s look at what a curly brace is and see why it is rarely used, as well as how it can be used should the opportunity present itself.

What is a Curly Brace?

It is a rare mark and should never be used for formal writing unless it is part of a math equation, music cord (also called an accolade), computer programming, or for separating lists of equal items.

Although not popular, it can be used informally to replace a bracket or parentheses in writing as well.

There are four different types of brackets, but only one goes by the name of brace. Braces or brackets and all the other names they can go by can quickly get confusing. Use this quick chart to help define which is which and how they can be used in writing.

To enclose supplemental information in a sentence that clarifies or illustrates information.

To insert corrections, clarification, explanations, or comments in quotes.

As part of a math equation, music cord, computer programming, and separating lists of equal items. May also replace parentheses or brackets in informal writing.

To insert asides, mention a website, or indicate speech in a foreign language.

History of the Curly Brace

Curly braces were first used in the 1960s as part of the computer programming language BCPL. It was used as the primary symbol to block coded information together when writing a program.

Prior to its invention, brackets and parentheses were used, but these quickly became confused due to the amount of information used in writing lines of commands. Introducing a new punctuation mark helped simplify and define different lines of data.

How to Use Curly Braces in Writing

As mentioned above, curly braces should only be used in informal writing or computer programming, math, and music. Let’s look at a few examples:

Math: to denote the fractional part of a real number

Music: to connect two or more lines of music 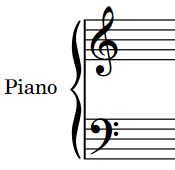 Lists: to connect lists or equal items in a sequence

There was no way I was going on a road trip {unless the gas was paid for} since I would rather fly to my destination.

Braces, a type of bracket, is also known as a curly brace or curly bracket and is rarely used in writing. It’s used as an extra punctuation mark for writing computer code and can also be seen in mathematical applications and music. In writing, you may also use it informally to replace parentheses or square brackets.

How to Cite a TV Show in MLA Format

What is a Complex Sentence? Definition and Examples

June 29, 2022
We use cookies on our website to give you the most relevant experience by remembering your preferences and repeat visits. By clicking “Accept”, you consent to the use of ALL the cookies.
Do not sell my personal information.
Cookie SettingsAccept
Manage consent

This website uses cookies to improve your experience while you navigate through the website. Out of these, the cookies that are categorized as necessary are stored on your browser as they are essential for the working of basic functionalities of the website. We also use third-party cookies that help us analyze and understand how you use this website. These cookies will be stored in your browser only with your consent. You also have the option to opt-out of these cookies. But opting out of some of these cookies may affect your browsing experience.
Necessary Always Enabled
Necessary cookies are absolutely essential for the website to function properly. These cookies ensure basic functionalities and security features of the website, anonymously.
Functional
Functional cookies help to perform certain functionalities like sharing the content of the website on social media platforms, collect feedbacks, and other third-party features.
Performance
Performance cookies are used to understand and analyze the key performance indexes of the website which helps in delivering a better user experience for the visitors.
Analytics
Analytical cookies are used to understand how visitors interact with the website. These cookies help provide information on metrics the number of visitors, bounce rate, traffic source, etc.
Advertisement
Advertisement cookies are used to provide visitors with relevant ads and marketing campaigns. These cookies track visitors across websites and collect information to provide customized ads.
Others
Other uncategorized cookies are those that are being analyzed and have not been classified into a category as yet.
SAVE & ACCEPT