Did you know that you can customize the theme of the Grammarly Text Editor Plugin so that it looks and feels like the rest of your app? Theming the plugin is a useful feature, and, honestly, quite fun to tinker with. To give you some examples, I decided to look for inspiration from one of my favorite artists of all time: the incredible Taylor Swift.

When Taylor announced her new album Midnights, I knew I needed to find a way to celebrate. Watching her TikToks to get clues about the track list was a good start (how long has Karma been in her vault, and is the song about Kanye?), but it wasn’t sufficient. And then it hit me: I could customize the theme of the Grammarly Text Editor Plugin to match every one of her albums. So that’s what I did.

I began by creating a web app where you can journal about Taylor’s albums. Inside the app, I created uniquely styled pages inspired by each of her albums. On each page, I included a text editor that uses the Grammarly Text Editor Plugin. Then I themed the plugin to match.

In this post, I’ll share the themes I selected for a few of her albums. I hope you enjoy my love story with Taylor Swift.

If you prefer watching a video over reading a blog post, don’t worry. I’ve got you covered. Check out this recording of a live stream I hosted with Brian Schiller, where we created the themes described below.

I was inspired by Taylor’s bedazzled guitar as I designed the webpage for her sophomore album Fearless. I found a picture of a sparkly guitar with gold trim for the page’s background.

I reused the guitar’s gold trim color in both the button color and the plugin’s interactive color. I replicated the curves of the guitar in the round edges of the text editor, the button, and the plugin elements by setting the border radius of each to 10px. 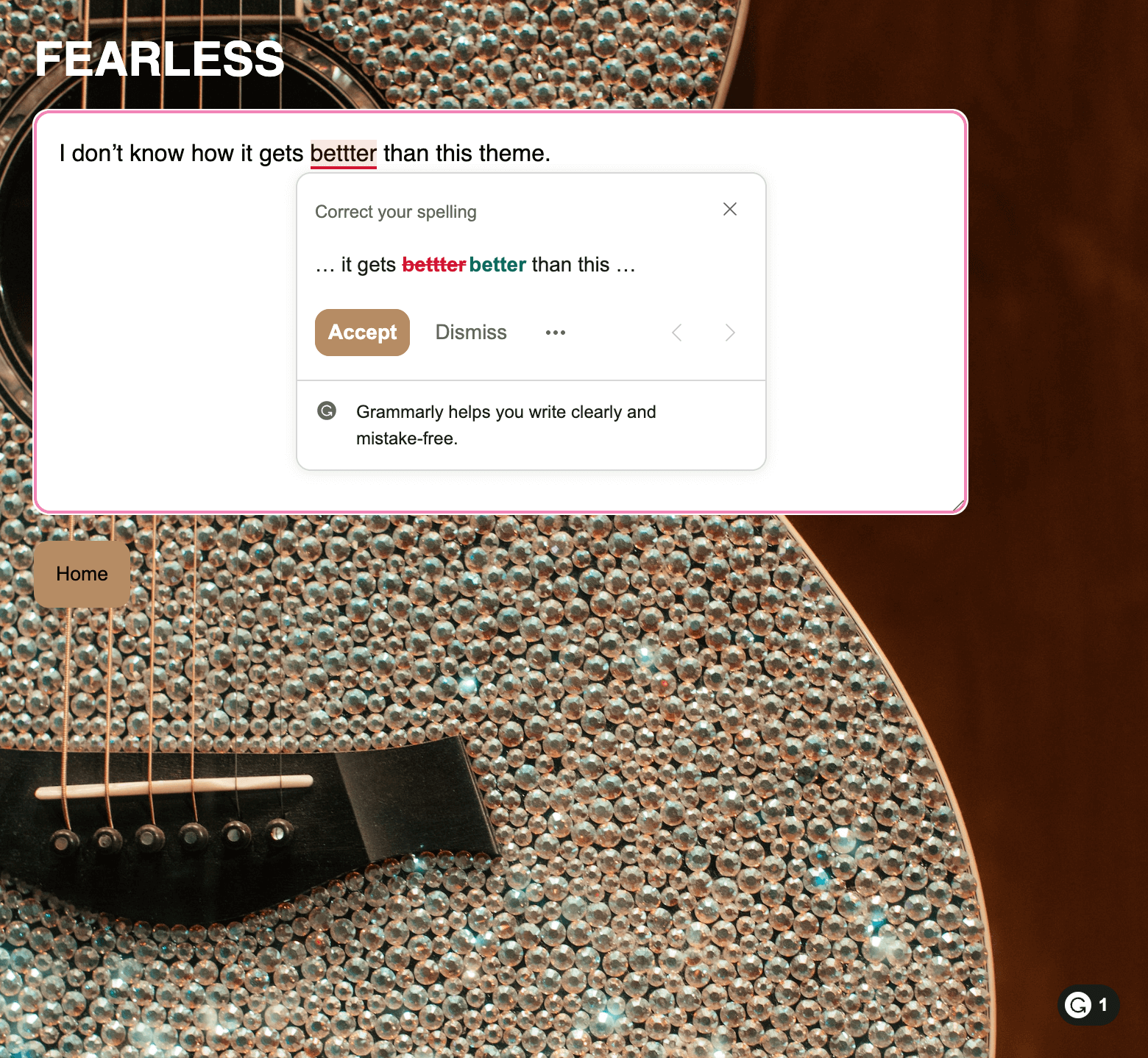 1989 was the first of Taylor’s albums I purchased (previously, I stuck to singles), and I loved all of the polaroids Taylor included in the album’s art. As I developed the page for 1989, including polaroids was a must, so I found an image with a collection of polaroids to use as the background picture. (I may have been more than a little excited when I realized one of the polaroid pictures is of a person holding a cat!)

In addition to customizing the plugin’s interactive color, default border radius, and card border radius as I did with the pages for the earlier albums, I decided to customize the plugin’s default font family. I chose a handwriting font that mimicked the handwritten captions on the polaroids in the album art. 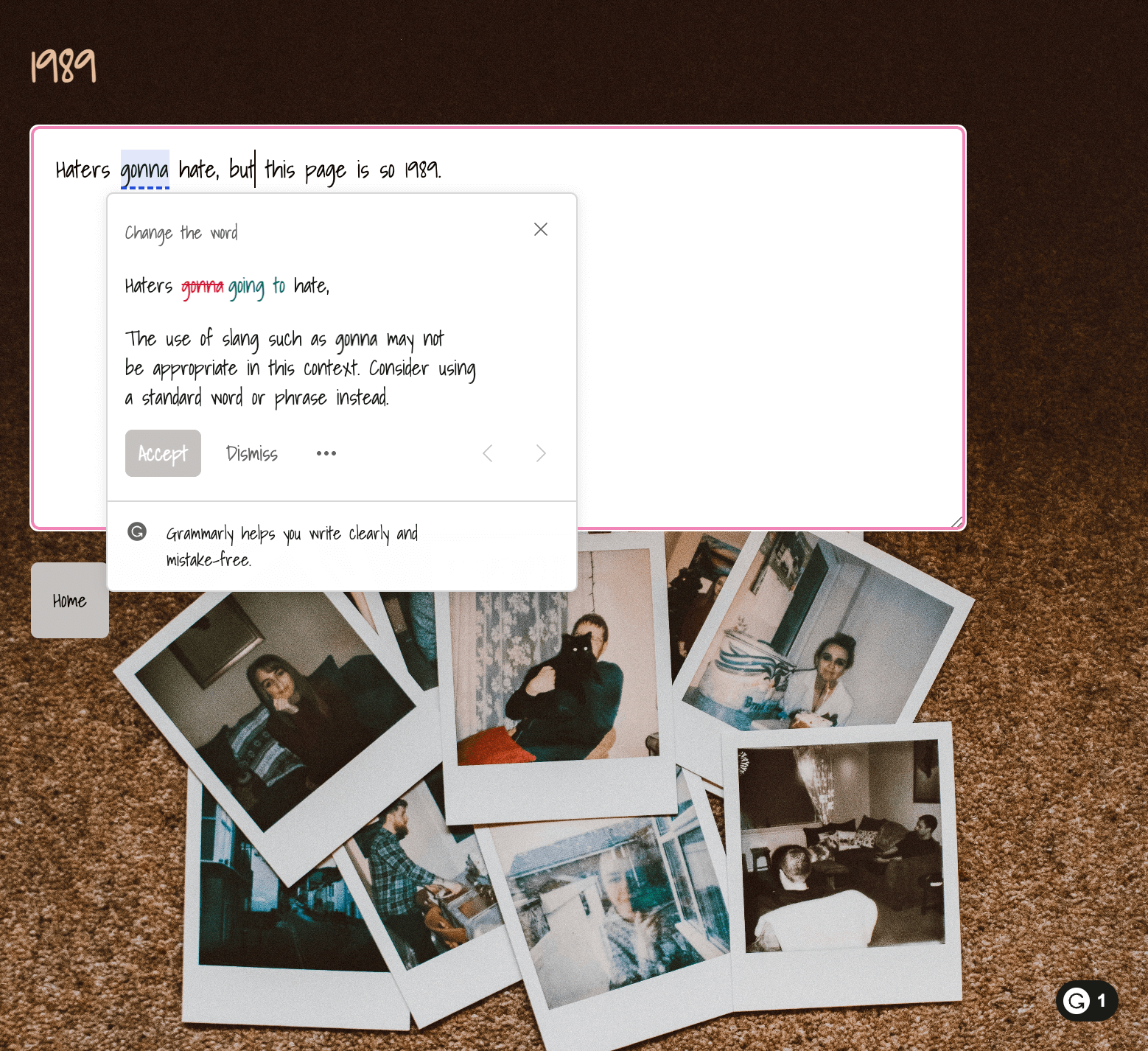 Taylor reinvented herself with her release of Lover. Her album art featured soft, pink clouds, so I included those on the page. Many of the songs on Lover were happy and light, so I gave the elements on the page large, rounded corners. I chose various shades of pink for the page and gave the text editor plugin a dark pink interactive color to match the theme. 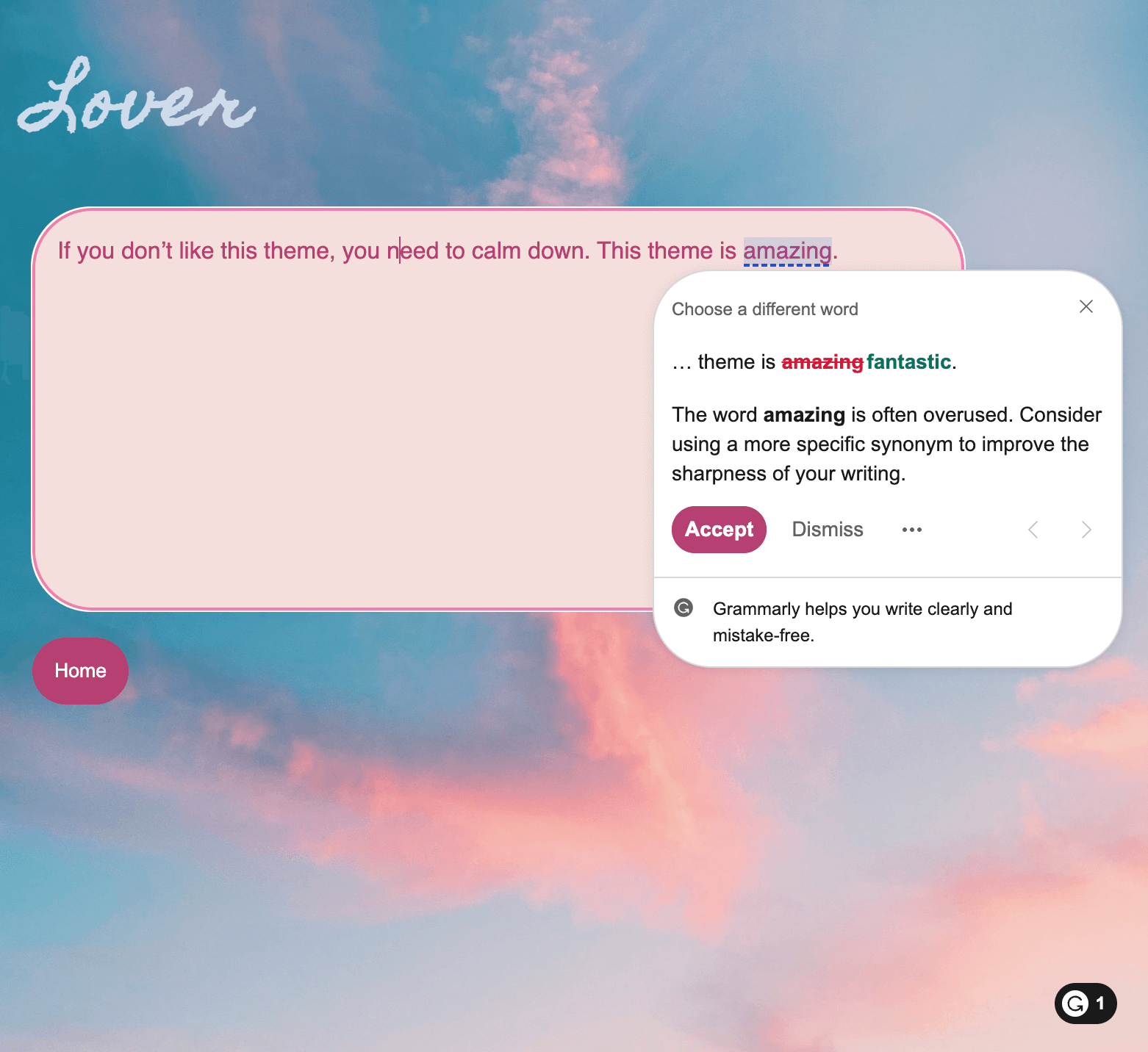 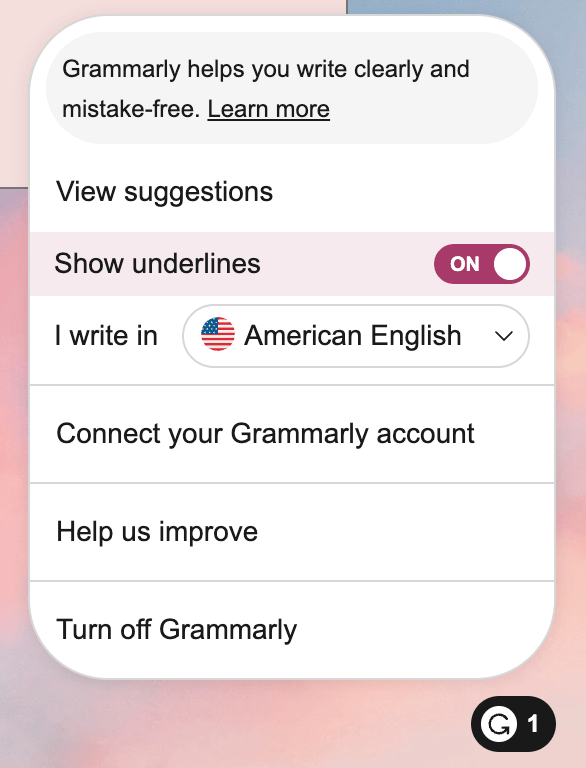 Folklore was my 2020 soundtrack. I played it when I needed a long, hard cry. It’s a vibe. The album cover features a black and white portrait of Taylor standing in the woods. This portrait inspired me as I selected a black and white photo of the forest for my page.

The plugin’s light mode would have looked out of place on this dark page, so I chose to use the plugin’s dark mode. Note that the plugin has options for rendering in light mode, dark mode, or light or dark mode based on the end user’s operating system preference. Check out the customization docs for more information. 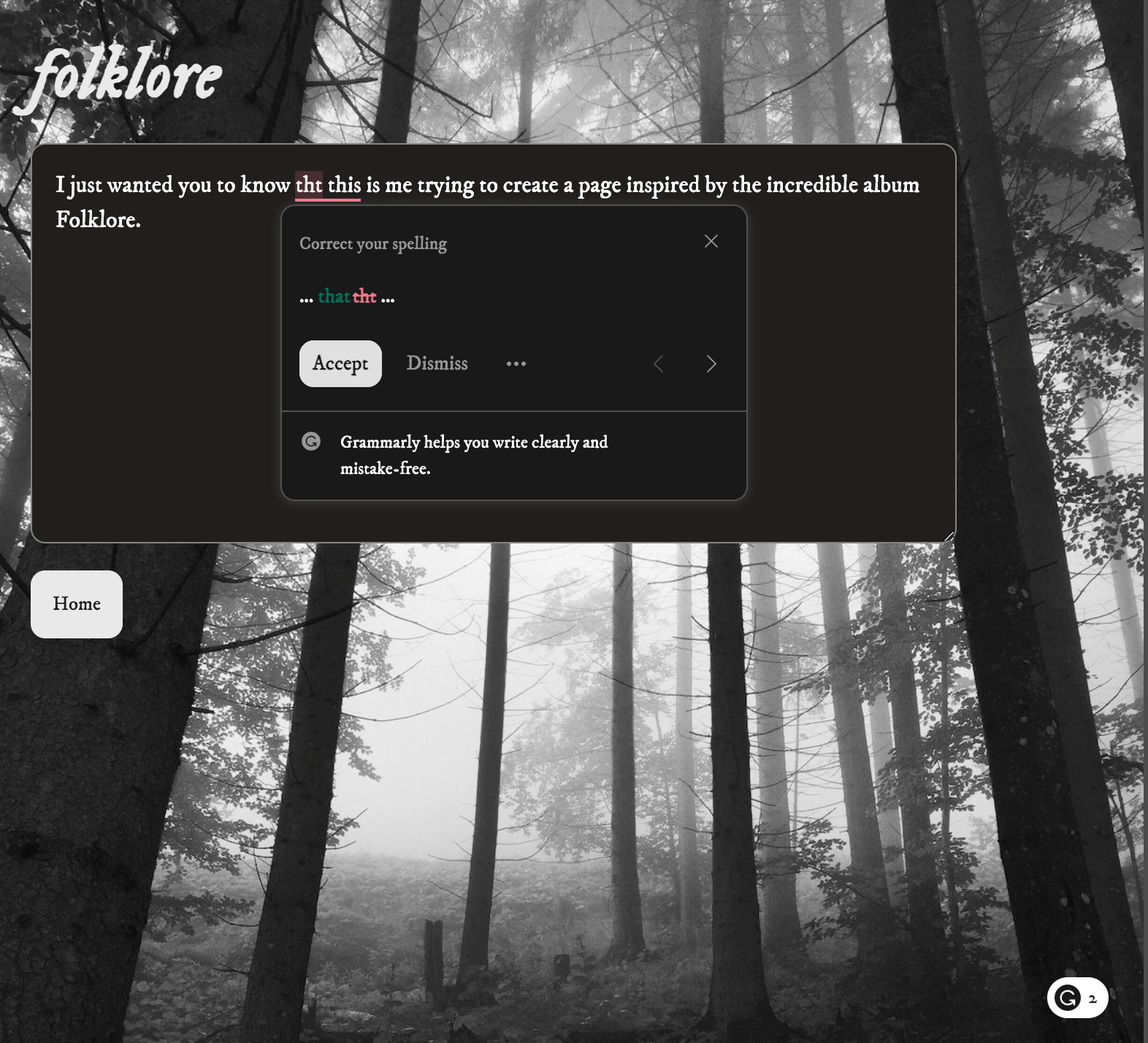 I’d love to see your plugin themes inspired by Taylor Swift or your other favorite artists! You can learn more about all the ways you can customize the plugin to match your app’s UI on the customization page in our docs. Create a webpage (you can start by forking mine if you’d like), and share a link or a screenshot in a new discussion in the Grammarly for Developers repo. I can’t wait to see what you create!

Take the plugin and make it your own!

What Is Morphology in Writing? Definition and Examples

Accept vs Except: Definition and Examples

November 22, 2022
We use cookies on our website to give you the most relevant experience by remembering your preferences and repeat visits. By clicking “Accept”, you consent to the use of ALL the cookies.
Do not sell my personal information.
Cookie SettingsAccept
Manage consent

This website uses cookies to improve your experience while you navigate through the website. Out of these, the cookies that are categorized as necessary are stored on your browser as they are essential for the working of basic functionalities of the website. We also use third-party cookies that help us analyze and understand how you use this website. These cookies will be stored in your browser only with your consent. You also have the option to opt-out of these cookies. But opting out of some of these cookies may affect your browsing experience.
Necessary Always Enabled
Necessary cookies are absolutely essential for the website to function properly. These cookies ensure basic functionalities and security features of the website, anonymously.
Functional
Functional cookies help to perform certain functionalities like sharing the content of the website on social media platforms, collect feedbacks, and other third-party features.
Performance
Performance cookies are used to understand and analyze the key performance indexes of the website which helps in delivering a better user experience for the visitors.
Analytics
Analytical cookies are used to understand how visitors interact with the website. These cookies help provide information on metrics the number of visitors, bounce rate, traffic source, etc.
Advertisement
Advertisement cookies are used to provide visitors with relevant ads and marketing campaigns. These cookies track visitors across websites and collect information to provide customized ads.
Others
Other uncategorized cookies are those that are being analyzed and have not been classified into a category as yet.
SAVE & ACCEPT